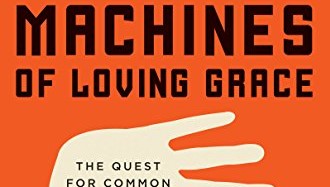 I came across this book at Kinokuniya and decided to purchase the audio book. What caught my eye and interest was the subtitle “The Quest for Common Ground Between Humans and Robots”. As an economist and a researcher, I am very interested to know more about the future state of the economy and society as we build better artificial intelligence. This is a theme I previously touched on in my earlier book reviews The AI Economy & Data for the People.

The book was written with only two keywords in mind – Artificial Intelligence and Intelligence Augmented. The first keyword refers to the creation of intelligence similar to that of humans which is capable of taking over tasks done by them, while the second describes the enhancement of human capabilities, like what computers and smartphones do.

John Markoff, who is a reporter at New York Times and currently writes for its science section, did a lot of research for this book. In it, he covers many areas of artificial intelligence research like symbolic AI vs connectionism, robotics, driverless cars etc. He also provides a rich history of the people, past and present, active in these different areas – who are the prominent key researchers and leading thought leaders – turning the whole book into a who’s who.

The audio book opened my horizon wider to how the previous researchers and thought leaders see where artificial intelligence research should be and definitely gave me more material to research on. My rating is 4.5 out of 5 stars for it.